Living The Cult of Mac

After 6 am saturday morning I was getting really cold for not moving at all and just sitting in the camping chair all night. Thorsten woke up when we arranged the que again and lended me his sleeping bag so I got in there and gathered some strength for a while.

I dont know what time it was when Starbucks finally opened but I think it was somewhere around 7 am. We got there with Thorsten about at 8 am and after warming up a while inside we took a walk to see how long the que was. We estimated it to be around 300 people but it was actually a bit more. (According to ifoAppleStore there were a total of 457 people in line at 7 am.)

People were quite restless when the opening got nearer. The last hour from 9 to 10 went quite fast. We were speculating about who was to be expected to meet us in the store and if there would be any celebrities like Steve Jobs or Bono, for example.

Approximately at 9.30 am half of the store staff run by the que and people were giving them high fives and cheering really loud. Things were getting very very exiting and people started to grab their backbags and other stuff. The last 15 minutes or so were amazing.

And then, finally, the cheering got Really loud and people laughed when Stormy was asked if he was ready to step in. He sure was. A couple of minutes later we walked just after him to the store where the whole staff (except of those unlucky ones who were serving us at the counters) was standing on the floor and on the glass staircases and were cheering and clapping. We walked by them, gave high fives and cheered and yelled with them. It was really awesome experience. Definitely one of the most memorable moments in my life this far.

Most of us rushed right away to the counters at the back of the store to buy lucky bags. There were many staff people to guide us in straight lines where we then queued again while listening to Vertigo by U2. Some minutes laiter I got up the glass staircase where still was many of the store staff clapping and cheering as I went by them. I was feeling great. The store looked really nice and all the people that I had been waiting for the past 20+ hours were smiling and obviously very happy. It seemed now that the waiting was definitely worth it. 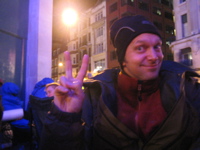 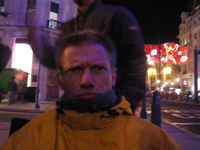 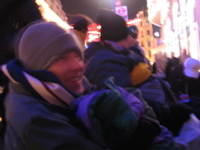 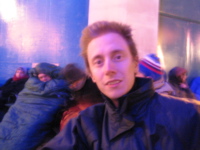 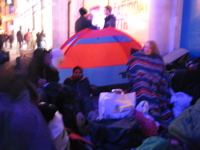 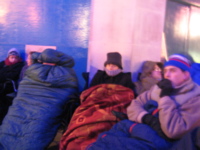 It got really cold during the night. Most of the people curled up in their sleeping bags and tried to get some sleep. At this point I realized that the 4.99 would actually have been quite a good bargain...

Anyway, there were few of us awake and we had to answer time after time to bypassers stupid (but intelligible) ”what are you doing here”-questions. It soon became so annoying that we started to use two main protocols to answering to people. One was to try and explain that there were Europes first Apple Store to open and we wanted to be here to see it, wich most of the people just didn't understand. The other one was to make up all kinds of funny (or not so funny) stories like ”We're here for this Ted Baker store (which was the store that we were in front of and wich would open in 7 days) because we like those clothes sooo much!” or ”There will be a iPod full of Tom Jones songs, including five remixes of 'Sex Bomb' and if you listen to them all, you'll get the iPod for free.”

Maybe the funniest -- and also mostly used -- BS story was that we all were queing (merely) for a free T-shirt :D ..wich was actually also partly true, because the first 2500 of us would get the free T-shirt ;) At some point somebody from the que stood up and said ”I think I'm speaking for most of us here that we really appreciate what you are doing there (answering the same questions time after time) so thank you”, wich was really nice.

The most annoying part of the waiting was when there were some drunken idiots coming from a bar or something and wanting to pick a fight. One of the queuers allmost got angry from their flaming but eventually things calmed down nicely. Basically most of the people walking by were quite nice. So, thank you londoners for being mostly nice :)

At some point of the morning Apple security staff started to gather fences around us and we had to arrange the que differently. That was also the point that many of us we're getting really exited. Only a few hours to the opening left and for our pleasure the Starbucks nearby would open really soon.

I woke up around 9 am feeling a little bit excited about the upcoming event. I headed soon to Regent Street and was there about at 12:30. At the time I got there, there were about 15 queuers allready. I counted myself as number 18 and was quite happy to find out that every single one in the group seemed very nice and talkative persons. Should be nice camp-out tonight.

Thomas pointed out that there were some cheap camping chairs and sleeping bags for sale in some store at Piccadilly. After talking to the group a while we decided to go and buy ones with a German guy who had arrived a couple of minutes after me. So we left the que and headed for Piccadilly.

My new acquaintance name was Thorsten. He was a couple of years older than me and a professional photographer / graphic designer. (And a Mac looney.) We came along really well and had a good time while hunting for camping chairs and sleeping bags. They both selled for £4,99 but I bought only the chair. Thorsten bought sleeping bag as well and later on some warm fleece pants too.

As we got back to the que it had grown up a bit. There were also some reporters on the scene who were interviewing mostly the Americans for travelling such a long way.

The Starbucks near by was a great place. Apart from serving warm drinks and having toilet facilities, we could also charge our laptops there. And they were really nice to us -- they even promised to open up 90 minutes early than usual on saturday morning for us!

For the rest of the evening we just basically chilled out in the line chatting and laughing. There were even some Apple staff chatting with us at some point, wich was really great.

Apple offered a free wifi-connection in the store wich you could use from outside too. Therefore there were allmost allways some of us in front of the store windows with a laptop surfing the web and reading emails. As we soon found out it was not a very good place, though, because all of the people walking by and asking the same ”why are you here” and ”are you the first in line” questions.

At some point during the nigh we decided to go and visit a local bar/pub for a pint. Some londoner at the que gave us directions to one nearby and so we went with Ute (?) and Thorsten. Had a really good time there and got a chance to warm up a little bit for the very cold and long waiting ahead.

When we came back to the que there was really not so much to do but wait...

A hectic day indeed. I managed to get about four hours of sleep before waking up in this big and wet city. I started my day by going to Regent Street to see with my own eyes the soon to be opened AppleStore. The black flag with Apple-logo on it was visible from far. When I got nearer, I found out that the store front had been uncovered and there were some people outside of the store looking at the new iMacs and iPods on display and also the store insides which looked really nice. There were few Apple workers inside the store with one man at the main door. Ocasionally people were trying to pull open the doors to get in, but of course, with no success. I informed someone eager to ”come back on saturday” :)

After seeing the new store front and feeling a bit down because of the rainy weather (which was exactly the kind of that I had allways imagined it to be), I decided to go to the MacExpo exhibition held in Islington Business Design Centre. For a London-novice, getting there wasn't so easy. Finally, with the help of some friendly brits, I found myself at the doors of MacExpo.

The exhibition was in relatively small area but there were many exhibitors. The most visible was of course Apple. They had several booths where they demonstrated new software and hardware, and they also had a big screen and some chairs in the middle of the exhibition area for presentations. The Digital Lifestyle got a lot of attention from exhibitors. There were several music and video products like iPod accessories, printers, digital video recorders etc. All in all, the exhibition gave a good idea of what's going on in the industry at the moment.

The first campers are allready there, reports ifoAppleStore.

My journey starts from a small town called Turku, located at south-west coast of Finland. The path which led me here is a long and winding one, but It's gotten a hell of a lot better recently.

After I switched, I've been following Apple and Mac community closely. When I heard the news of AppleStore opening in London I just knew that I had to be there. After months of working for it and arranging things I'm finally on my way to Regent Street.

For me this trip is a bit more than a visit to the first applestore in Europe. My lovely girlfriend moved abroad, to France, about two months a go. She's studying to be a translator there and this is my chance to visit her. And yet, from France we're going to visit my father who works in Alicante, Spain. So, it's going to be quite a journey and and it starts here.

I'm not really a traveller-kind-of guy. I like it back home and usually travel only to summer festivals or to visit relatives, in Finland. It was snowing when I left Turku. I wonder what kind of wheather will I meet in London. I've never been to England before. Nor France or Spain, for that matter.

I'll try to post stories to these pages daily and if I'll manage to find Internet hot spots maybe some pictures, too. Now I think I'll just enjoy my first travel experiences and try to relax. It's going to be a hectic day tommorrow.

Hello! You are reading travel stories of an travel-illitterate. These pages are about my visit to London at the time of Grand Opening of Regent Street AppleStore.

How I became a Mac user